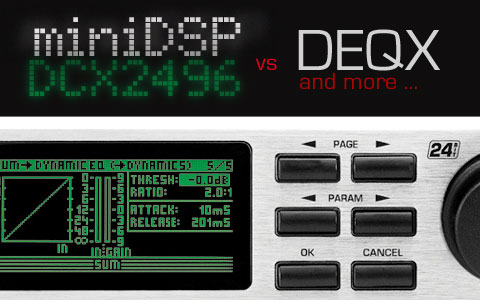 Considering the many challenges of passive crossover design, many DIY enthusiasts are running their speakers actively. The advantages are compelling:


Update: How do they sound?

In a recent series of listening tests, I had a chance to compare four different active options in two systems. Some of the results were surprising.

Siegfried Linkwitz uses analogue active filters in his speakers. The advantage is that no digital to analogue conversion is needed, although as the complexity of the crossover increases, any sonic intrusions are cumulative. To work in analogue, the crossover must be designed and soldered and this is quite involved. It's a custom solution just like a passive crossover and can't quickly be changed. Working in the digital domain, once the digital to analogue conversion is made, as many filters as the chip allows can be made, including time domain and phase related corrections. Digital crossovers and DSP are far more powerful, and can be quickly and instantly changed without making physical changes to the boards. For this reason DSP is the way of the future. It is possible to construct an entire system where there is only one digital to analogue conversion, in which case DSP becomes even more attractive. It's important to keep in mind that while in the digital domain, changes can occur that impact on sound quality.

DCX: a bells and whistles crossover

The first choice for many is Behringer. Ultradrive DCX2496 and Ultracurve DEQ2496.

These are low cost and powerful options. Ultradrive has 6 channels, allowing stereo 3 way or 2 way for mains and centre in a surround application. Each channel has many different EQ options. Ultracurve is a dedicated EQ unit with much more powerful EQ options. It can be used for response shaping and is powerful enough for EQ that deals with room modes. Ultradrive doesn't have enough EQ processing for difficult room modes.

Ultradrive is used by Emerald Physics in their highly regarded speakers using waveguides and pro drivers. BESL use Ultradrive in their speaker development process, and supply it for use with their speakers.

One of the very attractive features of DCX is digital delays. Each channel can be time-aligned. There is an auto-align feature that calculates the required delay. The delays assigned are not neceesarily what you might expect, and might not correspond to physical driver offsets. If you sit closer to one speaker, you can also correct for this. This feature can have a dramatic impact on imaging.

These units use servo balancing which is necessary for professional use but not for home use. As a result, in the home noise is introduced into the signal chain and it would be better to have unbalanced lines. The power supply is also noisy switchmode. Some have argued that the DAC isn't the best quality. As a result of these downsides, many different upgrades are available, many of them costing more than buying the unit itself. The ability to upgrade does make it more desirable.

Having used both units I can say that you can get a very good result with them and that they can improve most systems. However, for a refined and high end system correctly set up in a dedicated room, I'd suggest something better is warranted.

DEQX: an advanced and complete option

For a serious high end system, the premium choice appears to be DEQX. The cost is much higher than Behringer, but it is more powerful and has been designed for high end systems, taking an input from a digital transport (CD/DVD/Blu-ray digital output) and also including a high end DAC and multi channel preamp. It has a remote unlike the Behringer units and very steep slopes as well as phase correction so that no time domain abberations are introduced.

DEQX is used by Legend Speakers in their top of the range active speaker Legend Tikandi. They also use it in their Big Red (Kumbar Wirri) speaker, which is available active and passive and the difference is described by Ed Kramer in a 6 Moons review, on the second page.

Hypex have created a built in system that uses a plate amp module for each speaker and digital active crossover which is set up by PC. Simply run an output from your preamp into the plate amplifier built in to the speaker. This eliminates amplifiers in your AV rack and gives a nice neat solution.

This is similar to the solution used by Australian custom speaker manufacturer Aslan Acoustics in their R1 and R3 Reference speakers. Combined with their music server, you have a complete system with just two components. For surround sound you just need more power amps and surround speakers.

For those inclined to get into DIY, a good analogue solution is found at Elliot Sound Products. A PCB is supplied with instructions for a 3 way active analogue crossover. It's important to keep in mind, however, that this type of active crossover simply uses textbook LR filters. My experience has been that a well designed passive crossover is better because more sophisticated filtering is needed. The other options are more powerful in that regard. I currently have a similar active crossover that I don't use as it wasn't an improvement over the passive crossover. The slopes and crossover points are all fixed by the components and multiple changes damage the PCB tracks.

A very appealing new option is now available - MiniDSP. They supply fully assembled DSP modules that can act as an active crossover and EQ unit at a very low price. You simply need to put together a power supply, which can be as simple as a plugpack, then mount it in a case. Digital I/O modules are available and each one has 4 channels to allow for stereo 2 way or 4 way for one channel. Essentially this has the same functions as the Behringer units at a much lower cost without the issues related to balanced lines and the power supply. The settings are configured with a PC. 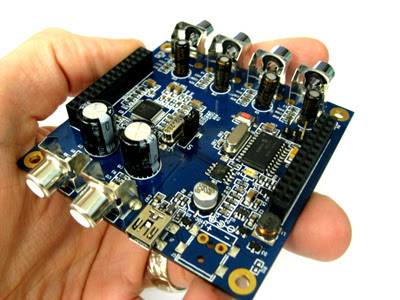 UPDATE:
MiniDSP now provide a plug and play solution and the cost increase is minor. In fact if you purchased a box and connectors it would probably cost you more.

One of the key features of MiniDSP is it's flexibility. Do you want to use your own DAC? The board is designed to allow this and many other options you would often not have.

Allocator: a PC based powerful crossover

Another powerful solution is PC software based DSP and crossovers. One good option is the Frequency Allocator at Thuneau.com.

It is an 8 channel option that requires a good quality 8 channel sound card. The software itself is cheap, and the solution is made more affordable if using an existing PC, but the cost of the sound card should also be considered. In order to get the most out of it, most users will need to upgrade their sound card.

How does it compare to the other options? In terms of features and performance, it seems to be comparable to DEQX. It allows up to 8 channels and so it can be used for stereo 4 way and it also can perform phase correction unlike MiniDSP and Behringer DCX. It can be used also in a surround system, although this means using the Lite version and running multiple instances. Phase correct isn't included in that case. For those who want to also use their system for 2 channel, it might make sense to run the full version for the mains and use MiniDSP for the surrounds.

There are many other benefits in using a PC in the sound system. It can perform the functions of a PVR and stream downloaded audio and video content. A PC can be a good platform for storing and playback. In many cases the cost of a PC solution is far less than stand alone components. For many, however it comes down to the question of whether you want a PC in your sound system and if you can get past the idea that surely the sound quality from a PC can't be "high end."

This option was pointed out in my other active options page.

I won't comment just yet as I haven't had a chance to investigate this option, but it does appear promising.

Next: which active option is right for me? >