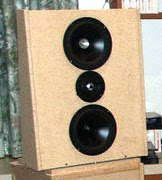 It all started with a saturday afternoon experiment. A very quick and dirty chipboard baffle and H frame. Three years later I'm still hooked on the sound. The difference became most obvious when I tried to go back to box speakers. After listening for a few weeks then changing back, it became clear that open baffle speakers have a certain magic to them I find hard to live without.

What is an open baffle speaker?

An open baffle speaker is variant of a dipole where no box is used. Electrostatic loudspeakers are also an open baffle dipole, but I use the term here to refer to speakers based on conventional dynamic drivers.

The key attributes to an open baffle speaker are:
A fair comparison

In changing between a box speaker and open baffle, I attempted to remove anything that might sway me either way. I used the same drivers and crossover, and used EQ to get the same frequency response.

How do they sound?

The downside is that the imaging is not as tight and focused. When sitting in the sweet spot and where everything is just right, and you are listening to a recording where the imaging isn't confused, box speakers have the potential to create a tighter image where it's easier to pin down where the sound is coming from. Open baffle speakers seem to stretch the sound stage. It's like comparing a projector to an LCD TV. You can't expect the projected image to be equally sharp. It's a matter of personal preference. Which do you prefer? It's a decision you can't make without experiencing both options.

One of the more subtle qualities of an open baffle speaker is the absence of box coloration. High end speaker manufacturers work very hard to try to remove the impact of the rear wave, but it is never completely removed. As a result, budget drivers on an open baffle can compare very well to much more expensive drivers in a box.

Open baffle purists insist on dipole bass as well. This is where one has to balance cost, size and output. To match the output of a conventional sub or woofer an open baffle needs to move much more air. Open baffle bass has a number of advantages:
The first advantage is part of the appeal of infinite baffle subwoofers. The second is unique to dipoles. With open baffle room pressurisation doesn't occur. Room modes are excited differently.

There are two schools of thought regarding the room interaction of dipoles with the room. One is in favour of dipoles as a means of minimising the excitation of room modes. This view has been made popular by Siegfried Linkwitz. A different view is promoted by Dr Earl Geddes, in which it is considered more desirable to deliberately excite as many room modes as possible with monopole subwoofers in order to achieve a smooth in room bass response. My own preference is for the Geddes approach.

My initial listening tests showed open baffle bass can be more accurate with conventional subs. However, once I obtained some Rythmik Servo subs, I discovered this isn't always the case. I set up two Rythmik subs - one a monopole and the other in a H frame. Both were calibrated so that their output and response were identical. Then listening to one of my familiar reference tracks with acoustic double bass, I compared, switching from one to the other until. Which one was more accurate? They were so close, it's hard to say any differences were real or imaginary.

I believe there is a reason the Rythmik servo subs didn't reveal a difference. The servo provides extra damping which vastly reduces the impact of the rear sound wave. Box coloration is reduced to the point that you can't tell if you are listening to a monopole or open baffle. This is why I now run my subs as monopoles. There is no reason in this case to give up output.

Open baffle speakers are normally considered expensive, complex and large yet with serious output limitations. This is not necessarily true, depending on certain choices.

My open baffle speakers are relatively simple and have high output without being large. The main panels have dipole roll off below about 300 Hz. This means eq is needed between this point and 80 Hz where the main panels cross to the subs. Midbass drivers can easily handle this eq and in real use I find the system sounds stressed before running out of excursion. The efficiency in the midrange is actually quite high at around 94 db 1w1m. Where high output is more important, an efficient woofer could be used as a monopole crossing where dipole roll off occurs.

There is a lot more that can be said about open baffle loudspeakers. If you'd like to read more, then I recommend the following websites: