Is there such a thing as a high end bandpass? Bandpass subs get bad press. Mention one on an audio forum and you can expect to hear things like "boom box," "one note bass" and "poor transient response." Bandpass subs are the forgotten gems of subwoofer alignments.

What is a bandpass sub?

A bandpass sub uses a tuned acoustic chamber which provides acoustic filtering. The two most common types are shown below: 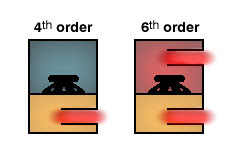 The answer is simple - acoustic filtering. Conventionally a sub has a low pass crossover which is an electrical filter. An acoustic filter also filters out distortion products. Distortion makes it easier to localise a sub, so this filtering means that it becomes harder to pick the location of a bandpass sub. This means greater placement flexibility.

Sometimes the measured ideal placement for a sub doesn't work because it damages imaging. You might get a nice smooth in-room result with a sub in the rear corner, but you can localise sounds coming from the sub. A bandpass sub can potentially fix this. You might get away with that position - a bandpass sub is a covert one and it's location can be a well kept secret.

Here is an example of a sealed sub compared to a 4th order bandpass with the Peerless XLS 12:

The response is very similar, but the sealed box uses a 2nd order low pass crossover at 47 Hz while the bandpass has no electrical filter. Both have EQ for extension. You can see why below, where the raw response with no filtering is shown:

Where high output is desired over a narrow bandwidth, a bandpass can increase efficiency with a bigger box and give you more output than you could achieve with a vented box.