Celestion Ditton 66 is a speaker that many enthusiasts have refurbished.

A client came to us with a modified version. All the original drivers had been replaced with new drivers that its owner hoped would work well.

As you can see, the front baffle has been modified with chamfered edges, which is a good idea, especially with a 3/4" tweeter which is highly sensitive to baffle edge diffraction. A Hiquphone 3/4" dome replaces the original along with a Morel midrange dome. Bass is handled by an Acoustic Elegance TD12X and is augmented by a Scan Speak passive radiator.

Our first step was to test the existing crossover with the new baffle and drivers. As expected, we found a significant mismatch.

Here we can see a number of issues, all of them quite common when changes are made without a crossover redesign.

1. The dome has a broad hump in the low end of its passband, which effectively shelves down the treble at 1.4k by 3 dB.
2. The top end of the dome has a hump centred around 5k - this is critical because the intended crossover is here.
3. The treble response falls with rising frequency, resulting in a loss of perceived top end detail.
4. Mismatch between tweeter and mid levels.
5. The high and lowpass slopes overlap so that when combined, there is a broad hump from 4 - 14k in the treble response.

In short, we have a mess!

Moving on to the woofer, we can see that the existing crossover is asking a great deal of the dome mid. The red plot shows the farfield response with the nearfield shown above.

There are a number of ways we can move forward with a project like this.

1. Fully passive - we could have simply redesigned the crossover. Many people like this option because it allows flexibility to use any amplifier. The downside here is that this requires many large and expensive components. Low grade caps and cored inductors are common to keep the cost down. However, with very high end Acoustic Elegance woofers, we would consider it a bad idea to bottleneck them in this way.

2. Fully active - this is a very popular option amongst DIYers. For this speaker it would have meant 6 amp channels (3 stereo amps). This option is most attractive where it allows drivers to work together which might have a difficult relationship in a passive design.

With this speaker, we have drivers that can easily work together in a passive design. However, we felt the best option overall was a hybrid approach.

3. Hybrid crossover - passive tweeter/mid crossover actively bi-amped - here the client was able to use the two amps he already had. We designed a new passive which is simpler than the original. It contains a high pass for the tweeter and a lowpass for the mid. This new and much simpler network made it feasible to use higher end compnents whilst sticking to a modest budget.

This is the new tweeter/mid passive network: 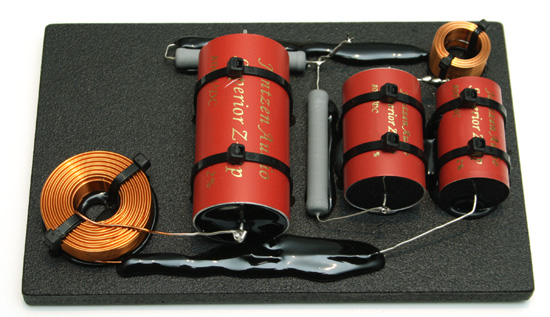 We were able to make it simpler by omitting the midrange high pass network - this would be handled by the MiniDSP active crossover. A further advantage we like about this approach is that we can shape the response further without adding more passive components. 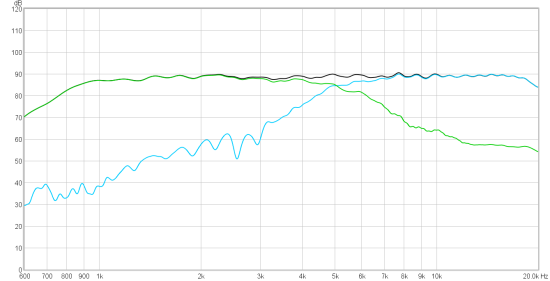 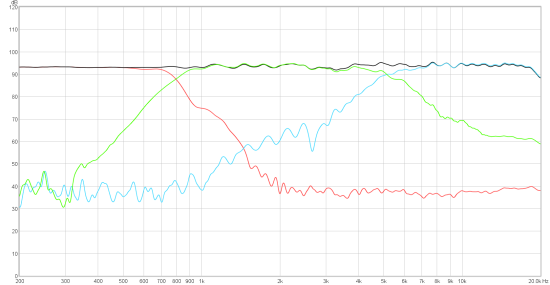 
In some speakers we find that a better subjective balance is achieved with a response that varies from flat on axis. This proved not to be the case here. This speaker sounds best with a flat treble response. However, the advantage of DSP implementations is that this can be easily changed. It's a simple matter of creating a different profile in which the bass and treble level can be modified.

Enclosure fill and the crossover

Did you know that the enclosure fill and the crossover have a relationship with each other? This proved to be true with this speaker. We found the amount of fill in the original to be inadequate. We wanted to raise the crossover point as we knew it would benefit the dome and the woofer would allow it. The problem was that enclosure resonances were interfering with the top end response of the woofer. If it were a sealed enclosure, we could simply fill the whole box. However, to preserve the operation of the passive radiator, the amount of lining is limited. The very large passive bass network also limited the amount of lining that could be used. Removing it meant we could use more lining, resulting in a smoother top end response.

How does it sound?


When it all came together, we noticed a well balanced sound. Smooth yet detailed top end with a nice integration throughout the entire range. The bass is clean, controlled and full bodied. Soon after our client had spent some time with them, we received a call. Usually this means there is a problem to solve - happy customers tend to enjoy listening to the music rather than call back to tell us about it. In this case the news was good. A happy customer describing the sound in very similar terms to those I've used. Even his wife commented on the improvement, noting that a particular track now sounds better than ever.
Posted by Paul Spencer