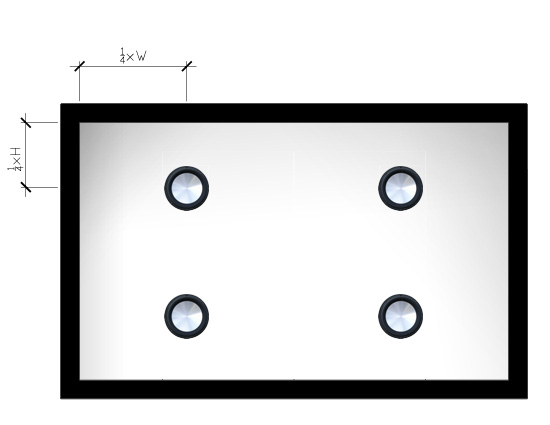 The Double Bass Array (DBA) is an interesting and clever way to integrate bass and eliminate room resonances or standing waves without acoustic treatment. In a typical room it can eliminate room modes below 80 Hz so it is ideal for a dedicated home cinema or music system using subwoofers. WAF is potentially high due to being able to make them invisible if installed like an infinite baffle arrangement. The main downside is that the method requires 8 subwoofers, yet the output is much less than one would normally achieve because it is equivalent to four subs in an anechoic chamber.

How does it work?

First, we start by creating a plane wave rather than a typical point source. This is achieved with the front wall array as shown above, where the drivers are inset 1/4 of the width and height of the front wall. If you can imagine the ceiling, floor and walls lined with tinted mirrors, you would see an infinite array of the subs, becoming gradually more faint with distance - this is what the array achieves. As a result the majority of room modes are eliminate because they are no longer excited. We now have room length modes.

Depth modes are dealt with by active cancellation. On the back wall a matching array is installed. It must be identical to the front wall. This secondary array has digital delay applied so that the sound is time aligned and the signal is then inverted in polarity. As a result front to back wall reflections are cancelled and so the remaining modes are eliminated.

Bass extension is based on the anechoic response of the subs. Sealed or IB subs will require more EQ than normal. The output achieved is approximated by a room with the front array and the back wall removed.

Whilst I have not used this configuration, I anticipate that many rooms will not be suitable due to the proximity of the listening position to the rear subs, which may create localisation issues if too close. A room with a depth of greater than 5m is most likely required, with seating away from the back wall.

This arrangement does not require bass traps that are effective in the range of operation.
A DBA is effective to a point determined by 172 / distance between subs.
In a room that is 4.5m wide this will be
172 / 2.25m = 76 Hz (horizontally)
172 / 1.35m = 127 Hz (vertically) for 2.7m ceiling height
In other words, in a room that size, we can bring in the subs at 80 Hz and the array will work over the entire bandwidth. Bass traps are not only unnecessary in this case, they are also undesirable. However, above the sub crossover of 80 Hz, we still have room modes typically from 80 - 200 Hz. That range can be treated with small broadband bass traps which are ineffective below 80 Hz.

An alternative arrangement is to build a single front wall array and then treat the rear wall acoustically. Given that we know which specific frequencies to target, we can use tuned absorbers such as membrane pressure traps or helmholz resonators. This is one situation where they come into their own. A low profile design is possible and this may be a good option in rooms that lack the depth to sit in from the rear wall, or where one wants to have rows all the way up to the back wall in a cinema room.

It is worth considering horn loading to overcome the inefficiency of this arrangement. This can also help with the cost. With a DBA, one might choose 8 low cost drivers and build tapped horns with form ply which is cheap and light. A single pro amp can be used, one channel for each array. Power demands are reduced due to the horn loading and cheaper drivers with lower excursion can be used. If space or cost is an issue, then a single bass array can be considered, as described below. 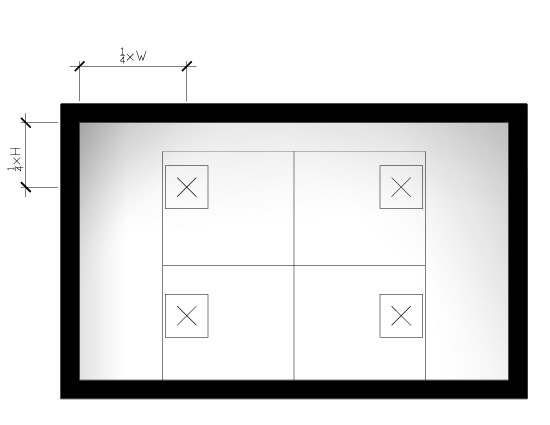 Usually there is some conflict between dealing with modes and boundary interference. Mounting mains flush in the wall like a studio arrangement eliminates speaker boundary interference, but this has meant giving up two of the best bass traps locations. Now with a DBA, one is able to flush mount the mains and not worry about giving up bass trap real estate.

Considerable material may be involved in effectively treating the rear wall, so in some cases it may not be cheaper than a DBA.

The concept is discussed in a thread on AVS >

Measurements are included which show the effectiveness of this method.

The concept was originally described by Klein and Hummel, but the paper is in German!